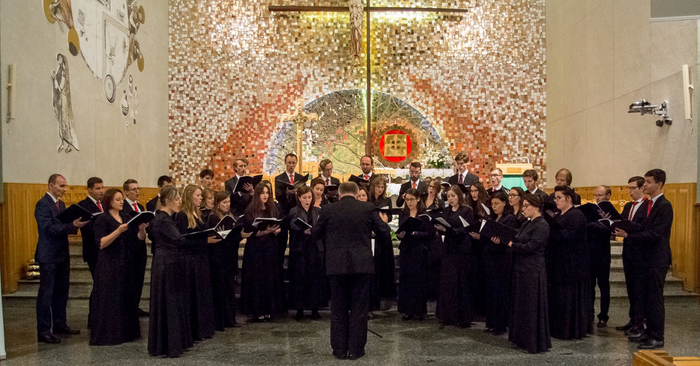 To mark the Moniuszko Bicentenary and the 90th anniversary of the birth of Romuald Twardowski, Psalmodia, the choir of the Pontifical University of John Paul II in Kraków, will perform in Vilnius on 15 and 16 August 2019.

Psalmodia is also celebrating a jubilee this year. Established in 1988, the choir has been led ever since by Maestro Włodzimierz Siedlik, long-time director of the Polish Radio Choir. Its repertoire includes pieces by Polish and international composers of all periods, with the ensemble placing strong emphasis on music by contemporary Polish composers such as Henryk Mikołaj Górecki, Stanisław Moniuszko, Romuald Twardowski and Józef Świder.

Psalmodia performs a cappella and with accompaniment. With multiple competition awards under its belt, the ensemble is invited to perform at home and abroad (Austria, Brazil, Czech Republic, France, Spain, Germany, Sweden). In September 2008 the choir joined the Polish and Interntional Federation Pueri Cantores. In February 2009 a women's and men's choirs were established alongside the mixed choir and maintain their own separate concert schedules. The Kraków Men's Choir is led by Ivan Vrublevskyi, while Łucja Nowak is at the helm of the Kraków Women's Choir.

Psalmodia has chosen to perform in Vilnius this summer to celebrate the bicentenary of the birth of Stabnisław Moniuszko and the 90th anniversary of the birth of another prominent composer whose work is the backbone of the ensemble's repertoire, Romuald Twardowski, who was born in the city.

The tour has been financed by the Pontifical University of John Paul II in Kraków and Fundacja im. Świętej Królowej Jadwigi dla UPJPII. The concerts are held under the auspices of the Polish Cultural Institute in Vilnius.